Did EU tell UK to Double Its State Pension?

So this was shared from the Facebook group ‘..uncensored Scotland’ to ‘Pensioners for Indy’ in April 2018. 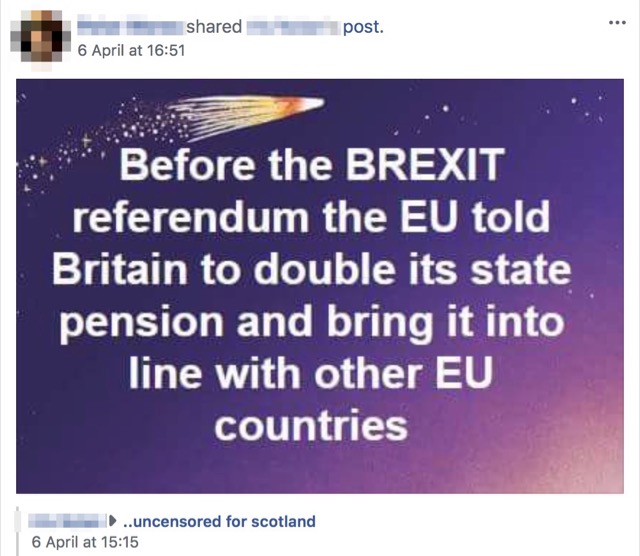 I doubt that there is anything in the claim at all. I mean if that had happened, UKIP and Mr Farage would have been all over it, telling is that even though it would be very good to double pensions, we don’t need the EU to be bossing us about and we’ll make our own pension decisions thank you very much!! And probably pro-Europeans would also be all over it as proof of how benefits that EU membership bring us.

I wasn’t the only person in P4Indy who wondered about it. These comments appeared. It’s clearly being interpreted as a reason why the Tories want us out of the EU which is a bit unfair to the pro-European Tories, including Theresa. 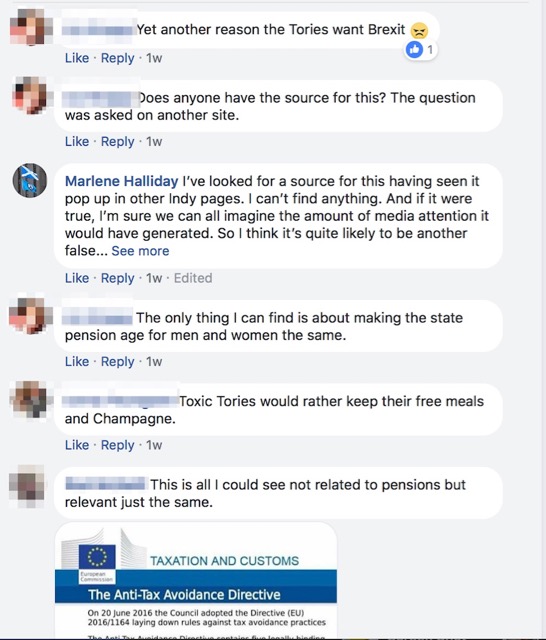 So none of us could find anything to back this pension meme up. The only thing I’ve found is this article in the Express in April 2016. It doesn’t mention doubling the state pension but it is pushing the idea that those EU-baaad-technocrats are plotting to grab power to Brussels.

From a Tory point of view, this is clearly a baad thing. And indeed the Express tells us that

“Some MEPs fear the EU is planning a ‘social union’, a centralised welfare state. …. The concerns have been highlighted by Tory MEP David Campbell Bannerman who has said that the European Commission is holding back a massive amount of centralising legislation until after the referendum.”

Meanwhile, again from the Express, Jeremy Corbyn welcomes the idea

Yesterday Labour leader Jeremy Corbyn made it clear he and his party wanted a social union with the EU. He said: “We want people to vote to remain in the EU so that we can develop a social Europe.”

The Express spins this idea as EU taking control away from UK. You could describe is a way of giving control to EU workers, unemployed, pensioners, etc etc. The idea is based on a move to get individual EU countries to sign up to the European Pillar of Social Rights. And indeed Marianne Thyssen, the EU Commissioner for Employment, Social Affairs, Skills and Labour Mobility, has been speaking about the benefits that would follow if all EU countries did apply that Pillar, click the Pillar of Social Rights to find out more. I hadn’t heard about it before researching this but it seems a pretty good set of aspirations to me, but then I don’t vote Tory. In brief:

The Pillar of Social Rights is about delivering new and more effective rights for citizens. It builds upon 20 key principles, structured around three categories:

In section 3 you find mention of pensions amongst lots of other policies the EU wishes to promote. Have a read through…

12. Social protection Regardless of the type and duration of their employment relationship, workers, and, under comparable conditions, the self-employed, have the right to adequate social protection.

13. Unemployment benefits  The unemployed have the right to adequate activation support from public employment services to (re)integrate in the labour market and adequate unemployment benefits of reasonable duration, in line with their contributions and national eligibility rules. Such benefits shall not constitute a disincentive for a quick return to employment.

15. Old age income and pensions Workers and the self-employed in retirement have the right to a pension commensurate to their contributions and ensuring an adequate income. Women and men shall have equal opportunities to acquire pension rights. Everyone in old age has the right to resources that ensure living in dignity.

16. Health care  Everyone has the right to timely access to affordable, preventive and curative health care of good quality.

18. Long-term care  Everyone has the right to affordable long-term care services of good quality, in particular home-care and community-based services.

And yes, Ms Thyssen does want to move forward on the contents of the Social Rights Pillar. She’s been talking about it here. As you read through these press releases, it does become clearer that Ms Thyssen and Claude Juncker and others in Brussels are serious about building in stronger social infrastructure for fairness in employment, social security etc.  Junckers spoke it recently:

In his most recent State of the Union address, on 13 September 2017, the President confirmed the Commission’s commitment to move forward with the Pillar as an essential means to create a deeper, fairer and more social internal market: “If we want to avoid social fragmentation and social dumping in Europe, then Member States should agree on the European Pillar of Social Rights as soon as possible and at the latest at the Gothenburg summit in November. National social systems will still remain diverse and separate for a long time. But at the very least, we should work for a European Social Standards Union in which we have a common understanding of what is socially fair. Europe cannot work if it shuns workers.”

This perhaps does approach the statement on the meme poster. Still no mention of doubling the UK’s state pension but certainly mention of a “social union” and a European wide set of standards to aim for. Even if MJunckers  also recognised that individual countries would continue with diverse systems for a long time.

OK so that’s anther meme debunked. And some interesting information uncovered in the process. Win-win.