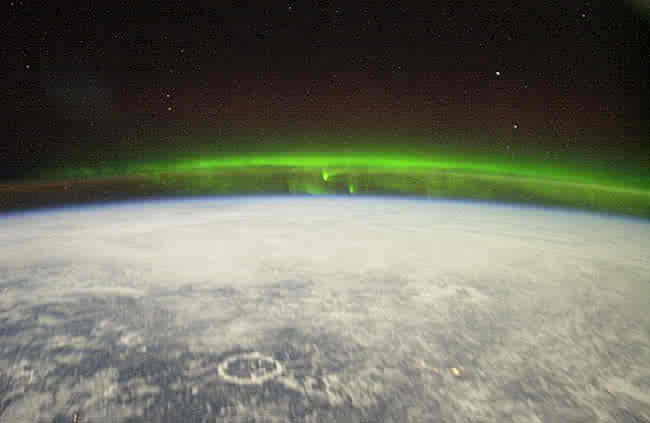 Only  few hundred years ago in Europe, we were told that our Home, and the Universe around it, looked like this …. 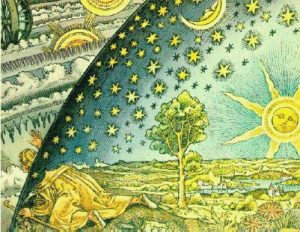 It took a brave man (probably a man) to even consider looking “outside” of God’s Earth and Firmament. But if you did “look outside” you saw the great majesty of God’s machinery for keeping everything going like clockwork. The clock which took the sun round the earth every day and brought the moon up every night, or thereabouts anyway. (Other religions had other views of how things are: millennia before this medieval European image, Buddhism had a very much vaster and more beautiful model for the universe which involved vast numbers of world-systems. And didn’t involve God interfering with clockwork or seven days worth of creation. Come back to that elsewhere in this blog.)

I’m not a believer in God but I can understand that the medieval mindset might have found some comfort in this teaching. God was up there looking after things like whether the autumn harvests would give them enough to eat or the spring weather would let their seeds sprout safely. God was in his heaven and all was right with the world. Well, except when it wasn’t but nothing’s perfect. Er, except God? OK, ok, Moving on….

Since then our view of ourselves and our place in the Universe has moved on… We’ve seen ourselves ‘from the outside’ as it were. Old age pensioners are, by definition, old enough to have heard those bleeps from the first Soviet sputniks launched in October 1957.

Humanity had entered the Space Age. I was 7 and a half.

Sputnik 1 bleeped away above us for about 3 months before falling back to earth. Here are the bleeps – with a bit of proud Soviet introduction and who can blame them for that   :

From then onwards, our outside view of ourselves has become more and more attenuated as we have sent space missions farther and farther away.  Until it has become a pale blue dot hardly visible from Voyager about 4 billion miles out.

The space race was inextricably tangled up with Cold War posturing but it did get us up there. And in 1969, it got us to the Sea of Tranquillity. I know. I stayed up to watch it happening. I was 19 by then. We all cried. Don’t let anyone tell you different. Some years back,  I took my nine year old daughter into the Science Museum in London. It was a special anniversary of the moon landings and they had a special exhibition with all the TV footage to watch. My daughter got bored and went off exploring with a little boy of her own age who was there with his dad. His dad and I watched the landing and we both cried and swapped stories of where we were when it happened. The kids came back to demand a visit to the cafe!

Astronauts have told us how when they looked down from orbit, they couldn’t understand any more why  we divide it up into ‘our bit of land’ and ‘someone else’s bit of land’; why we draw borders and stop the wrong people from moving past those borders. Becasue from space, it’s clear that this planet is one indivisible life-supporting wonder, one exquisitely  beautiful whole. They sometimes described this a sort of ‘spiritual’ experience. There was so much excitement and wonder and optimism back then. Gasps of dismay when the Apollo 13 mission went so badly wrong and more tears when NASA brought them all back safely. And if you haven’t seen it, get hold of the film The Right Stuff

Noone then would have imagined that 50 odd years on, there would be people who would seriously believe it was all faked and propagate misinformation to support that nonsense. Nor would we have imagined so many people would be picking and choosing scientific facts to suit their preconceived ideas, ignoring the ones that don’t suit them, or their vested interests, or their bank balances. But then we wouldn’t have believed that people would deny the effectiveness of immunisation against measles. Or still not accept the facts of evolution and its wondrous results on this pale blue planet of ours. Or spend their lives misinforming others about the age of this earth.

We are such a stupidly arrogant species and such an intelligent marvellous species. And we mange to do both at once!

OK you can see where I’ve got too : old codger bemoaning the present and yearning after the past! No, no. What I’m talking about is much more than that and is of much more crucial and important consequence for our species than an  OAP’s mere plaint. 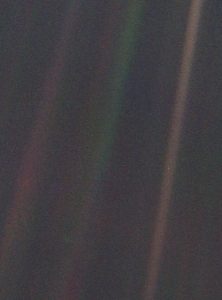 Can’t see the dot? It’s midway and centre in the orange band on the right. You probably think it’s a smudge on your screen.