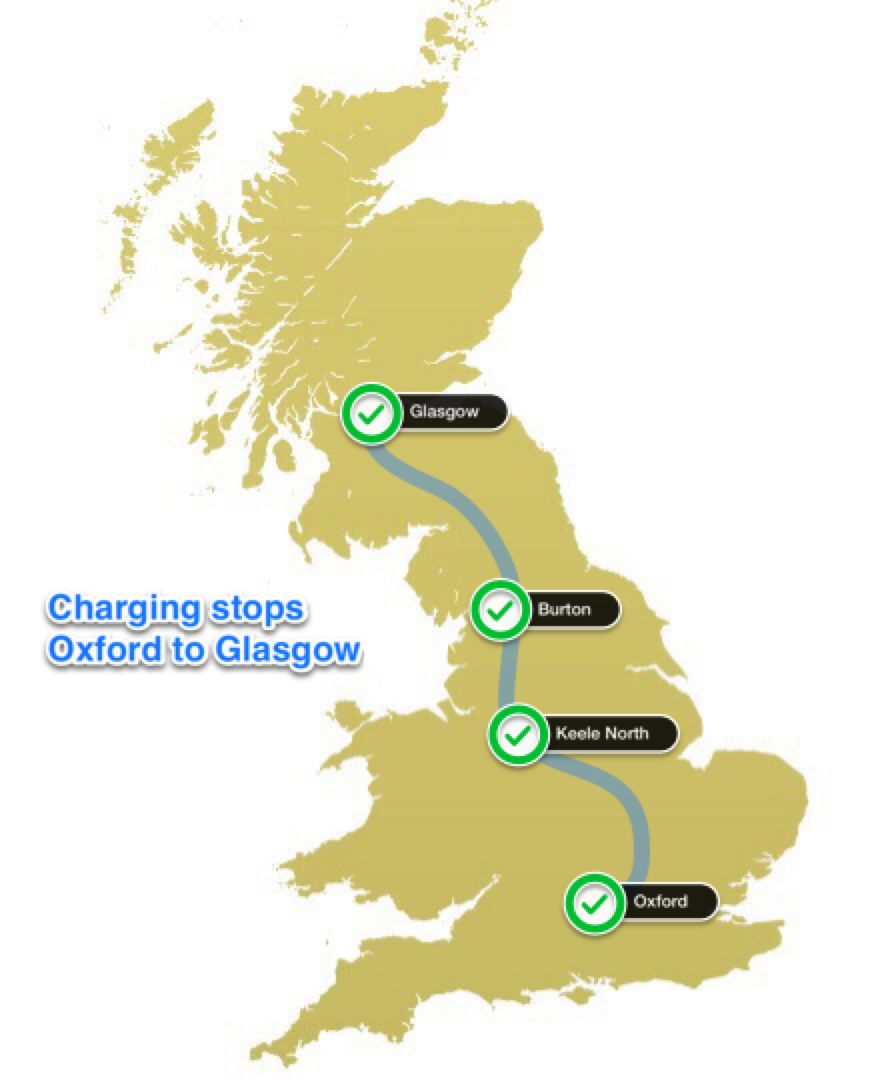 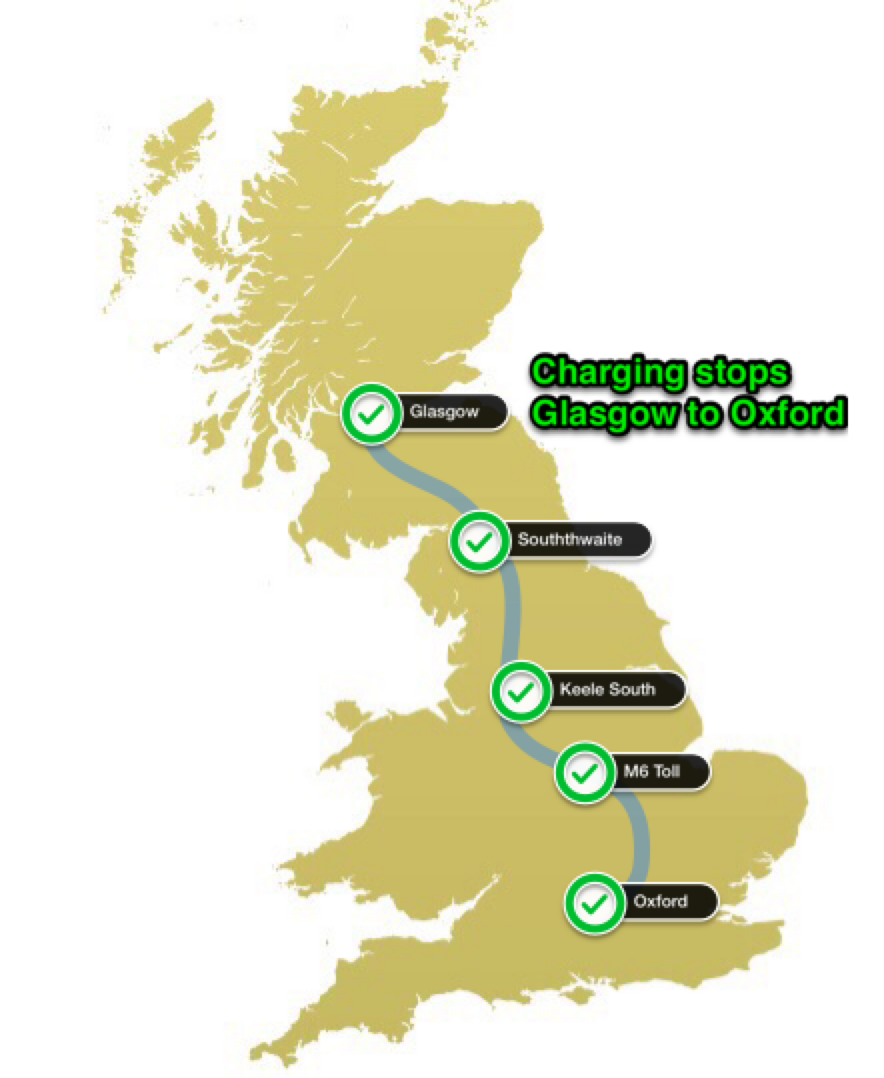 Mid-November 2017, after six weeks of pottering around our local area in our new BMW i3 REX, we set off for Oxford. Big adventure.

I’d been getting 125-130 miles in the city with the advantage of regeneration charging when slowing down at lights, etc. This is one of the nice bits of electric driving. When you take your foot off the accelerator, the car responds as if you’ve used the brake and starts to slow down. Then it gets clever and converts some of the ‘braking’ energy into electric current which is fed back into recharging the battery. Basically driving an EV car means that you hardly ever use the actual brakes!  But motorway driving doesn’t produce much in the way of regeneration since you’re mostly driving at constant speed. And it was November, so getting colder, which also cuts back on the range. So all a bit unknown…. this is what happened:

Then to Keele, 140 miles. Couldn’t get the Ecotricity charger to start 🙁  So refilled REX and carried on Rexing.

Third stop at Norton Cane, 32 miles further on. Got a full 31kWh charge with Ecotricity, and topped up REX. 🙂

Up to Keele: 119 miles, Ecotricity CCS charger would’t work. 😡 Used their 45kW Type2 instead and got 6.5kWh charge which is surely an abysmally low charge – it’s about 33miles worth – for 45 minutes? Refilled REX feeling exasperated with chargers. 😤 (Since first writing this post I have learned more about how the car converts AC to DC. The onboard charger is limited to 11kW so connecting to a 45kW AC charger is always going to be a slow charge.)

We always stop twice on this journey whatever type of car we’re driving. But it  took longer than it would have done in a petrol car. Especially going home where we wasted about 90 minutes because of chargers delivering a very low charge and me not noticing.

I was disappointed that the battery range was only 107 miles. I was expecting something more like 115-120 miles. But that expectation may have been naive given that it’s all motorway driving and it was November, both of which reduce the range. The 107 range was pretty much constant for motorway driving. My days of whizzing along in the fast lane at more than the speed limit are long gone anyway. I mostly drive at about 65mph. Be interesting to see what the range is like when we’re down again in the summer. Certainly without REX the journey would have taken much longer and been more stressful.

REX stands for Range Extender. BMW offer an i3 REX which adds another 60-90 miles to the driving range. That’s the upside. The downside is that it involves using a small petrol-driven  internal combustion engine which produces electricity and keeps the battery topped up. So I’m burning petrol when I’m using it  🙁  For normal car use, I never have to use REX but as you can see from the journey details above, I resorted to it quite a lot. I reckon in the overall journey of 760 miles, we used REX for 180 miles, so about 25%.

One reason for resorting to REX was the reduced battery range of just 107 miles. The other reason was faulty chargers. In this case they were all Ecotricity chargers. We suffered more than we needed to because of my inexperience though. Next time I won’t be relying on an app to tell me that everything fine, I’ll either be sitting in the car or I’ll be popping out from the cafe to check.

My memory of the trip is how great a car it is to drive but mixed with general anxiety of doing our first long EV trip and the additional specific frustrations of the chargers. But it is interesting seeing the maps which I’ve put together for this post. I look at them and think wow, that was pretty good! 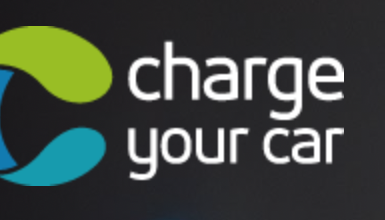 I drive a BMW 94aH i3 REx. That’s an EREV, an extended range electric vehicle. My highest ever battery range is 170miles in the summer. But at this time of year, and on motorways, the battery gives us about 110more ... 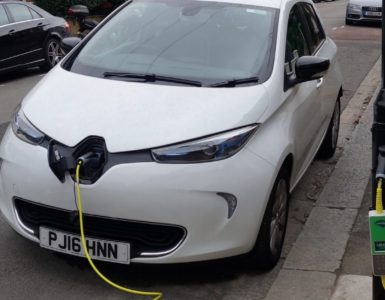 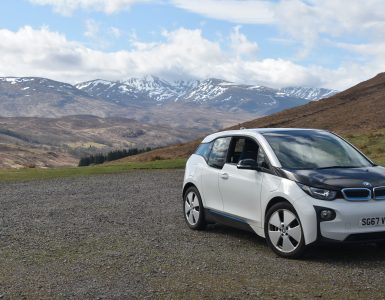 In October last year , I took possession of a new car. This one. It’s electric. BMW i3 Rex. It’s new and I financed it with the standard £4500 discount for any new electric car, covered by UKGov, and anmore ...