Over the years I’ve responded to many a plea from the online petition organisers 38 Degrees and added my name to many of their petitions. And I’m sure that they have shone light on unfair practices, targeted unethical actions, and righted wrongs. But I’ve been getting more and more frustrated with them.

It started about a year back when it seemed to me that they began sending extremely self-congratulatory emails with statement of this ilk:

We’ve done it! After months and months of campaigning by 38 Degrees members and many others, the Scottish Government have said: “Fracking cannot and will not take place in Scotland“. (Link)

The one about fracking particularly annoyed me. It certainly implied that 38 Degrees with some months campaigning could take much credit for the ban . Whereas in fact the ban came about after some years of an interim moratorium on fracking, applied by the Scottish Government through its planning powers. During those years, ScotGov set up a body of advisers to examine scientific evidence on how fracking would impact Scotland given the particular geology of the fracking areas,  to identify any problems likely to arise from opening fracking wells, and to look into the  legal situation of imposing a complete ban. There was an official public consultation process so that anyone in Scotland, individual or group, could add their views. Local communities in areas likely to be impacted by fracking were consulted. So yeah, over the space of some months 38 Degrees organised an online petition and added it to the body of evidence being collected. But ScotGov hardly needed brought to its senses by 38 Degrees. 38 Degrees didn’t put up the money involved in all these years’ background efforts. And 38 Degrees won’t be paying the legal fees if fracking companies take ScotGov to court.

Then in January, they sent out an email implying that NHS Scotland was on it knees.  This is what it said (bold fonts as in email)

Scotland’s NHS needs our help. New figures show that in one week this year almost 1,500 Scots were forced to wait more than 8 hours – and some as many as 12 hours – to be treated in A&E departments. [1] That’s just not good enough.

The Scottish Government say the flu crisis is to blame. [2] But this is a problem that’s been bubbling under the surface for a long time. [3] Scotland’s NHS simply needs much more money to provide the world-class service our country deserves.

The Scottish Government is working out the details of its new budget at the moment. [4] That means there’ll be intense conversations behind closed doors to iron out the details of where money will get spent. If we can get our voices heard in those debates,we can make sure our NHS gets the money it needs.

Will you sign the petition telling the Scottish Government’s health minister to make sure our NHS gets the funding it needs?

SIGN THE PETITION
Things might not be as bad up here as they are down south. But that isn’t much consolation to someone stuck in a waiting room for 12 hours.

People in Scotland deserve the best healthcare possible – and right now, that isn’t what we’re getting. Whether it’s waiting times, or local hospital services facing cuts, it’s clear that our NHS needs much more funding that it’s getting right now. [5]

It doesn’t have to be this way. If enough of us speak up, we can show the Scottish Government that they need to take bold actionand give the NHS the money it desperately needs.

Will you sign the petition now to get our NHS the funding it deserves?

[4] BBC News: What does 2018 have in store for Scottish politics?:
Summary of draft budget: Key points at a glance:
[5] The Telegraph: A&E chiefs from 68 hospitals warn patients are ‘dying in hospital corridors’ amid ‘intolerable’ safety risks:

I keep in touch with what’s happening in NHS Scotland, mostly via John Robertson’s excellent website “Talking Up Scotland”. I know that NHS Scotland is more than keeping to it’s targets for waiting times. It’s doing much better than NHS in other parts of UK. I get highly irritated with statements such as :

“Scotland’s NHS needs our help. New figures show that in one week this year almost 1,500 Scots were forced to wait more than 8 hours – and some as many as 12 hours – to be treated in A&E departments. [1] That’s just not good enough.”

Things might not be as bad up here as they are down south. But that isn’t much consolation to someone stuck in a waiting room for 12 hours.

Well, 38 Degrees, that’s just not good enough. The waiting times are not about being stuck in a waiting room. They are the time for the complete process of being admitted to A&E to be discharged after treatment or transferred to non-A&E ward. If the total admittances to A&E on some unspecified one week this year  were 1501, well yes then clearly, 1500 of them waiting more than 8 hours to be seen, treated, transferred or discharged would not be good enough. But if the total weekly admittances were 30,000 then 1500 is  5% of the total meaning that 95% of patients were seen, treated, transferred or discharged within 8 hours. And yes, 38Degrees, it’s good to give references but your reference for this figure is the Daily Record. Now, call me picky but if you’re going to bandy about numbers then OK you might begin by reading something in the Daily Record but you really need to delve into the official statistics to verify it.

For example here are the A&E statistics for A&E admittances in first three months of 2018: 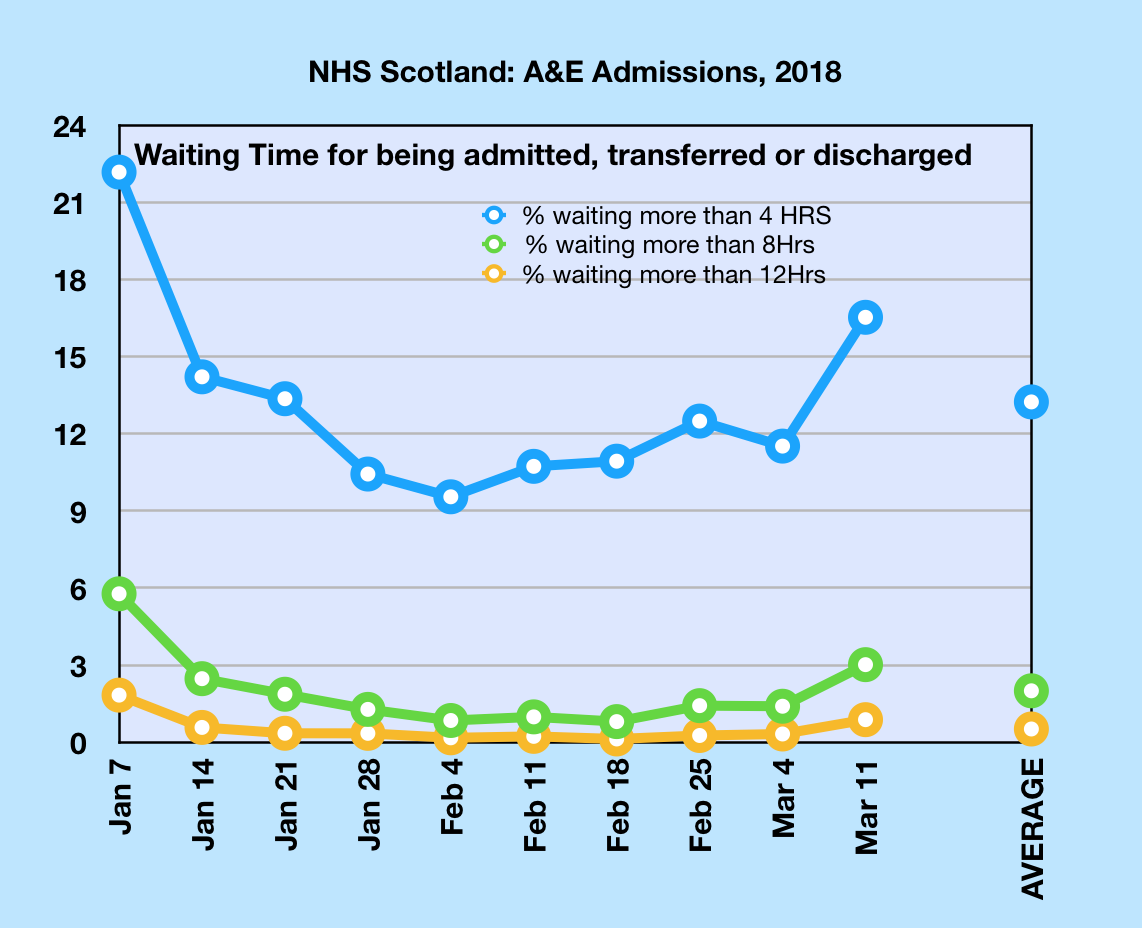 To put that into perspective, in the week which began on Hogmanay, 21% of A&E admissions had to wait more than 4 hours before either being treated and sent home or being admitted to a non-A&E ward. That 21% corresponded to 5600 people. The other 19,700 got treated in less than 4 hours. Of that 5600 people, 1461 (about 6% of the total) had to wait more than 8 hours and of those 1461 folk 463 (about 2% of the total) waited more than 12 hours. So that first week of 2018 is roughly comparable to the state of affairs that 38Degrees is starting a petition about. But we know what we Scots get up to in and around Hogmanay. We get drunk. We fall over. We head out on office parties in the snow and ice. And the rest of us get the flu! Come on 38Degrees, Is it  fair to use statistics that are comparable to the effects of our favourite 2-day holiday break?

By the way the average NHS Scotland A&E performance so far this year is :

And remember that’s not how long someone waits in the A&E waiting room. That’s how long it takes to get admitted, treated, and either transferred or discharged. You can check the figures at ISD Scotland. PS You won’t find them in the Daily Record

Context is important. It’s only fair that if you ask folk to sign a petition you tell them about the context for your concern. You know, like telling me that on one week it taking more than 8 hours to be discharge 1500 patients from A&E is comparable to what our A&Es has to deal with at Hogmanay!

So let’s have a look at some other context about NHS Scotland. Oh look, it seem that we have twice the number of nurses per head of population as the rest of the UK. 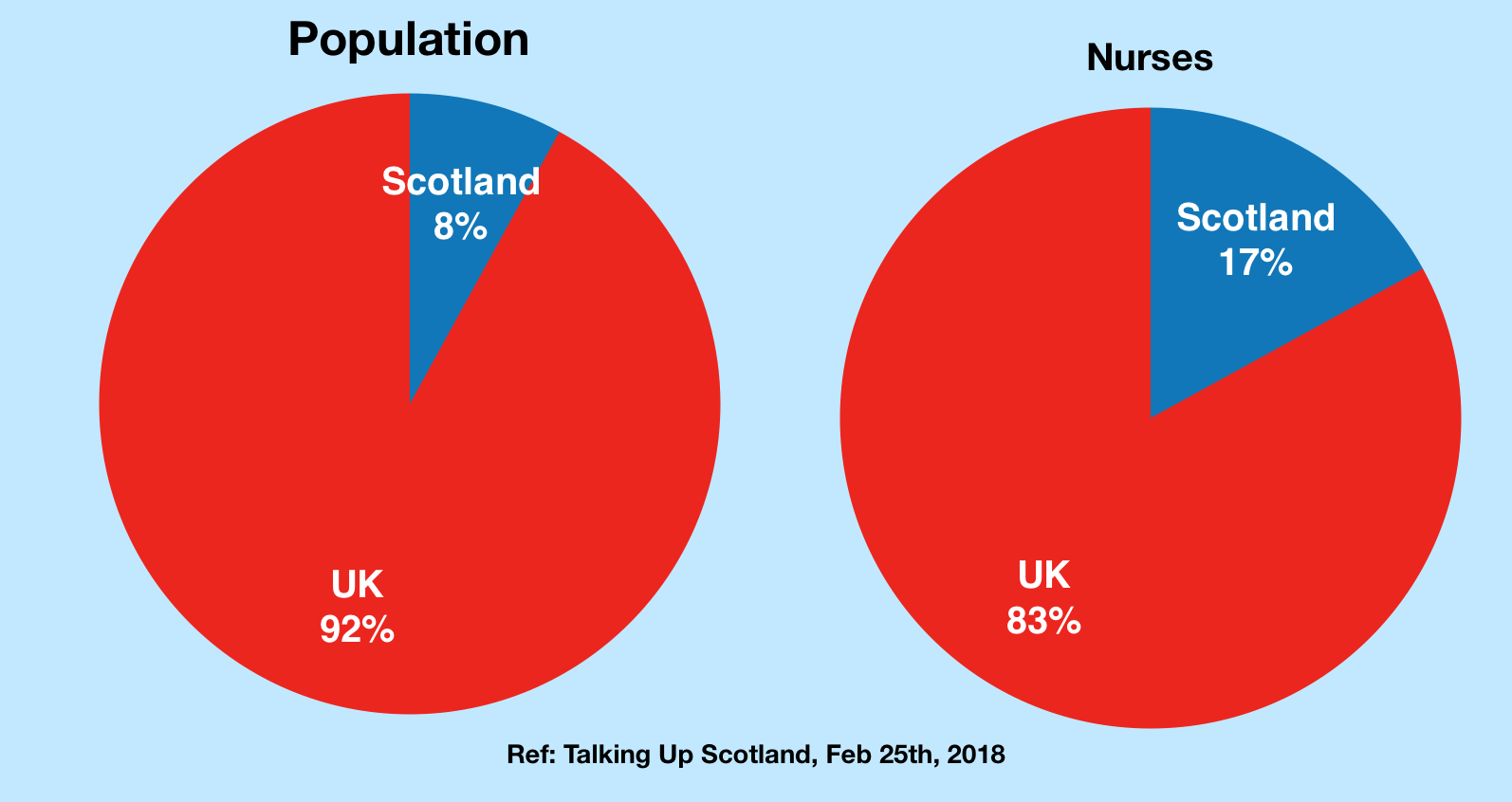 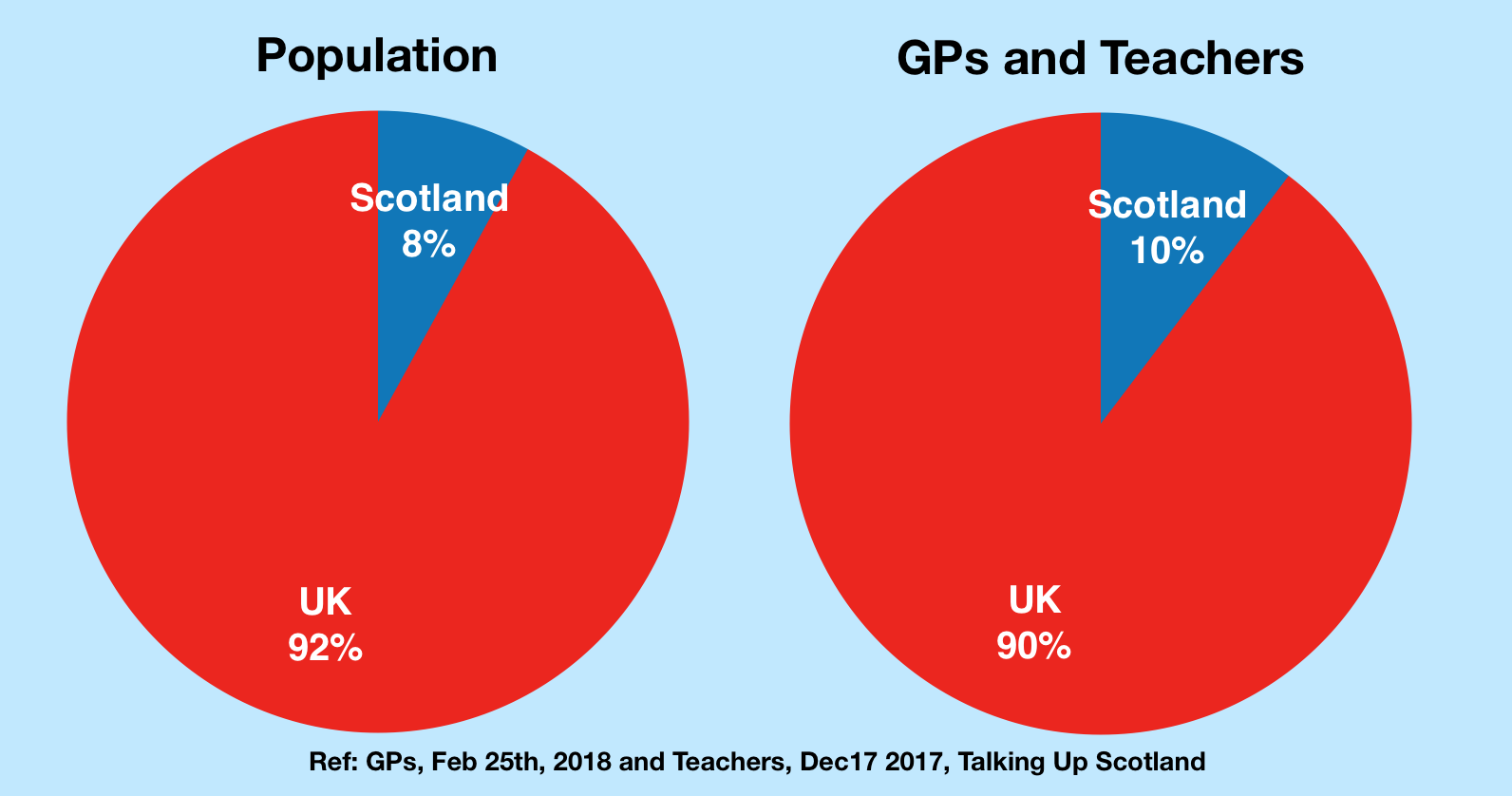 Not quite as good as the nurse numbers but still a quarter more GPs for us Scots than my English friends and relatives have access to.

The Nuffield Trust has done a detailed study of called “Learning from Scotland’s NHS“. Here are some of it’s conclusions:

In the face of this in depth analysis, maybe 38Degrees should be asking us Scots to support a campaign to improve NHS England?

As the Nuffield people also point out, NHS Scotland is grappling with some hard pressures and has to make some hard choices. One is the pressure of providing care out of hospitals so that bed-blocking doesn’t add to waiting times for operations. That’s a pressure facing the NHS everywhere. Audit Scotland has quite a lot to say about taking action on integrating health and social care in its NHS in Scotland 2017 Report. Not heard of the Audit Scotland? Maybe 38Degrees haven’t either since they don’t include them in their references. Here are some of the Scottish Auditor General’s responsibilities are:

Have a look on page 6 and the following pages on their views on integrating social care.

Finance is the other problem for NHS Scotland. According to Audit Scotland

Scottish health budget is primarily funded from the Westminster block grant to Holyrood. The amount calculated and allocated to ScotGov is a ratio which depends on the amount of NHS spending in the rest of the UK. That’s all and well, except that NHS England is privatising more and more of its services – eg a GP Practice may be owned by Virgin Health. So if the amount of public health spending is being reduced proportionately in England then that is reflected in the amount allocated to Scotland despite there being no such privatisation of NHS Scotland’s services. And on top of the effect of privatisation in health services, there is the general austerity policy of the Westminster government which beings about decreases in ScotGov’s budgets overall.

All NHS has performance targets. Here is how NHS Scotland is getting on. It’s taken from the Audit Scotland report, page 22. 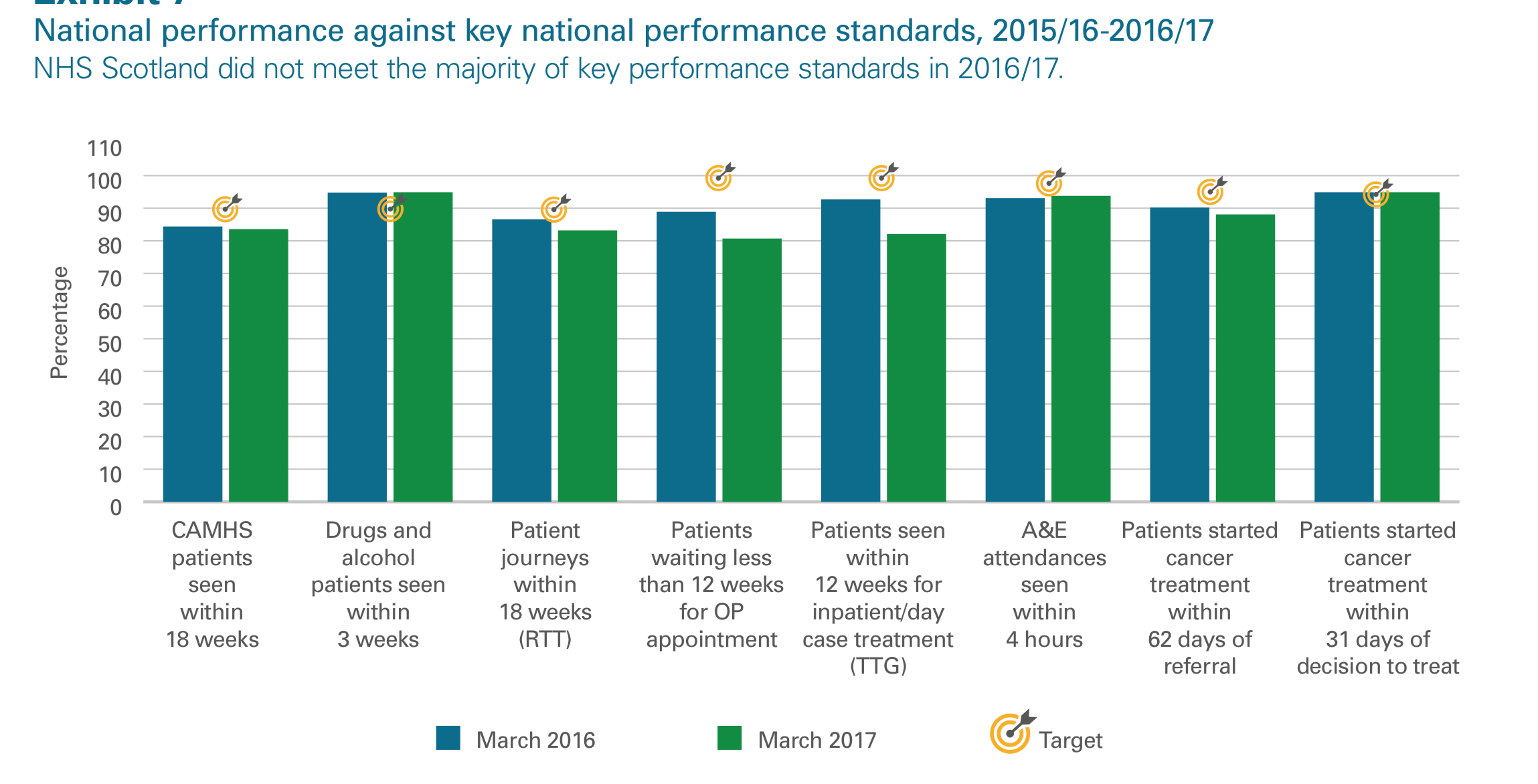 I’ve looked diligently for an equivalent chart for overall NHS England performance but I can’t find one. However here is a King’s Fund report on how England’s A&E Depts are getting with reaching their 95% target for seeing people in less than four hours. 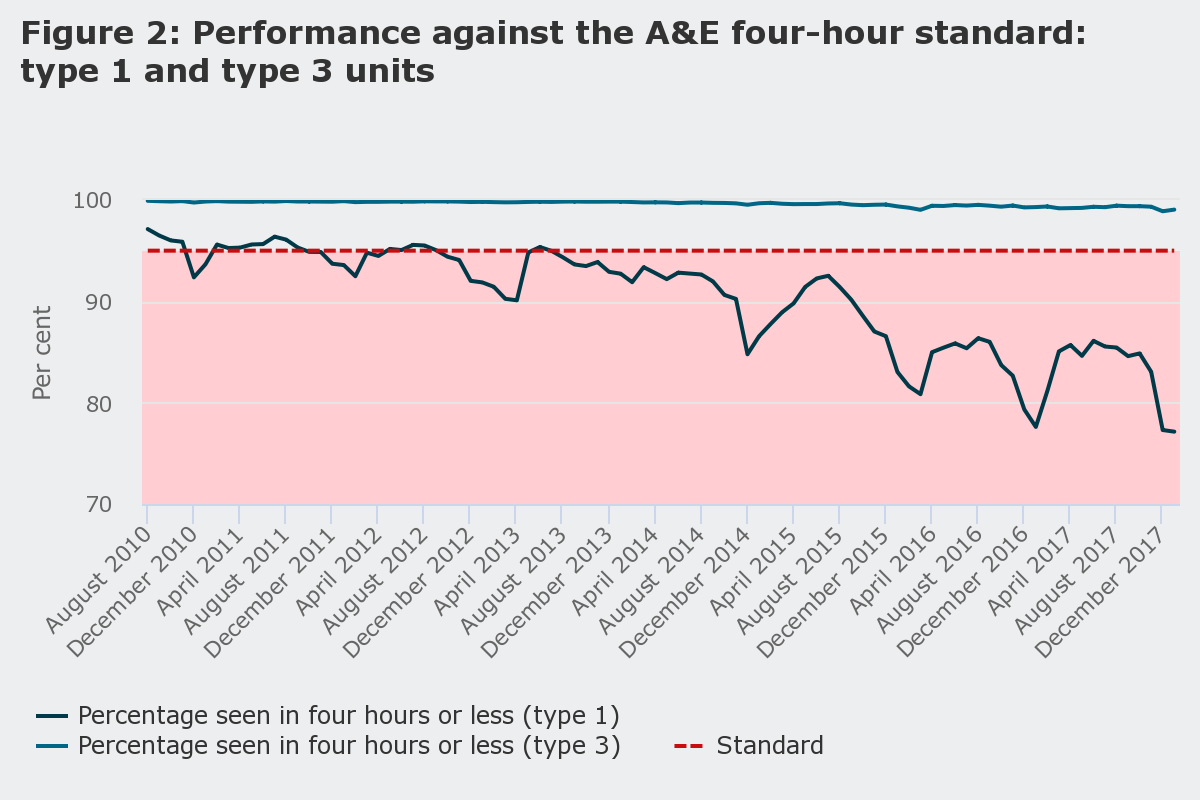 In December 2017, 77% of A&E admissions to Type 1 Depts had to wait longer then 4 hours to be seen. All Scottish A&Es are Type 1 Depts. Note that this report talks about  waiting to be seen. It doesn’t say anything about how long to be treated and discharged or tranferred. It’s possible that the performance is the same as in Scotland and it is about being seen, treated and discharged from A&E. I haven’t been able to find out. However it is clear that NHS Scotland reaching 90% is doing better on reaching the 95% target than NHS England is hovering around 85% on average.

NHS Scotland is bearing up. It has problems. It also has a very proactive Government at Holyrood who are trying their damndest to support the NHS and help it stick to its original vision set up 70 years ago in 1948. That in itself is a big advantage over NHS England where chunks of its services are being tendered out to private interests who are in it to make money.

38Degrees people may be trying to support NHS Scotland. But they need to: 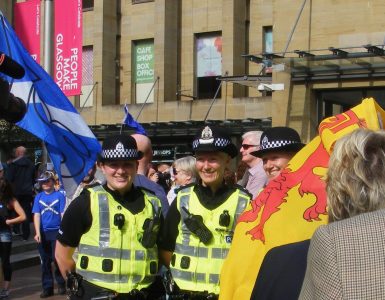 Crime Falling, Police Scotland Doing an Excellent Job, reported No-one.(Except John Robertson in Talking Up Scotland and possibly other online bloggers. And possibly The National.) Recorded crime is at its lowest levelmore ...