Or how our Westminster Government conceals its policy plans from our UK Devolved Governments.

This week ITV reported on UKGov documents which were leaked by the Guido Fox website. Those documents contain policy plans for 1 Jan 2021 when the Brexit transition phase comes to an end and UK finally, finally leave the EU.

Here’s one extract that Guido Fox put up on their website. It’s a slide which was presumably used in a presentation:

Let’s come back to the bits highlighted in yellow later. Look at the red ink. It’s an instruction not to share the last three bullet points in the slide.

So there you go. UK Gov is making planning assumption about food supply disruption. Food is a devolved area. But are they gonnae tell us about those assumptions? Naw. It brings to mind those times as a kid when you think you’re playing football but then someone walks off with the ball saying it’s their ball and they’re no’ playin’ any longer. (And yes I did play a bit of football as a kid, though I soon swapped over to hockey)

What’s Not Being Shared?

All EU laws still retained will be revoked by Parliament. Except it won’t be by Parliament, it’ll be done by a “statutory instrument”. Basically that’s the power where details of a Bill are filled in afterwards by a Minister. And that is not voted on by the Commons, thought an MP can object that the Minister doesn’t actually have the power for that particular bit of “filling in” or secondary legislation as is it’s more correct name.

Statutory Instruments aren’t new. They are valid and part and parcel of how Bills are implemented. But you have to wonder why plans for this particular set of interments are being kept from Scottish, Welsh and NI Governments.

The next bullet point is about subsidy control and needing constancy in those when negotiating Free Trade Agreements. What boils down to is that Scotland, Wales and NI will not be able to design subsidies for their particular industrial or agricultural sectors. So consistency ends up being whatever suits English sectors since they are by far the largest.

And Subsidy Control is going to be reserved to Westminster during the enactment of the Internal Market Bill due in December.

They’ve drawn up assumptions about disruption to food supply – food is a devolved policy area – but oh no, they’re not going to tell the devolved governments what those assumptions are or how they might effect the other three nations in this union of equals.

It’s a union of equals. Don’t leave us, lead us.

Just putting heading there to remind us what we were promised in 2014.

We’ve had six years – thought it feels like several generations – while UKGov has itself disputed those sentiments.

You’d think we’d have got used to Perfidious Albion by now. Time to go. 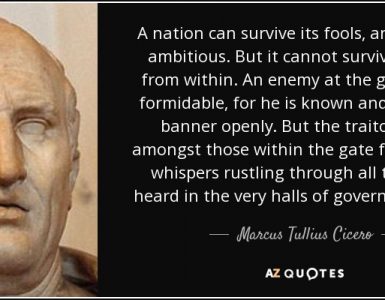 In old days men had the rack. Now they have the Press. That is an improvement certainly. But still it is very bad, and wrong, and demoralizing. Somebody – was it Burke? – called journalism the fourthmore ...