North Sea Oil – Still Game After All These Years?

Is the UK North Sea Oil Sector its Last Legs?
During the 2014 Scottish Independence campaign it certainly seemed that North Sea oil was at the end of its useful life. We kept being told that independence would be a disaster for Scotland. We’d be bankrupt, not least because the oil was about to run out.

The Scottish Government White Paper on Independence used the oil industry’s own estimates of 24billion barrels of still recoverable resources. Then Sir Ian Woods intervened in the debate  saying 15-18 billion barrels was more likely and that by 2050 an independent Scotland wouldn’t have any oil revenue income. (Ref: BBC, Aug 2014). Sir Ian doesn’t support Scottish Independence. That doesn’t mean he was being biassed in his estimate but his opinion was given a great deal of weight by the Unionist-supporting media (ie nearly all of the UK media) and less was given to the oil industry’s opinion.

What was reported hardly at all was that the oil industry was saying almost as much oil remained recoverable as had been taken out of the North Sea, 24 billion barrels left compared to 28 billon barrels already extracted. And even Sir Ian’s estimate was equivalent to half to two-thirds still remaining compared to what has already been taken. Not to mention the gas reserves..

A recent paper by Prof Roy Thompson, a geologist at Edinburgh University,  claims that it will all be gone in ten years, though there have been plenty of opposing voices to Thompson’s calculation. Scroll down through this link to find the objections …. Here’s one of them: 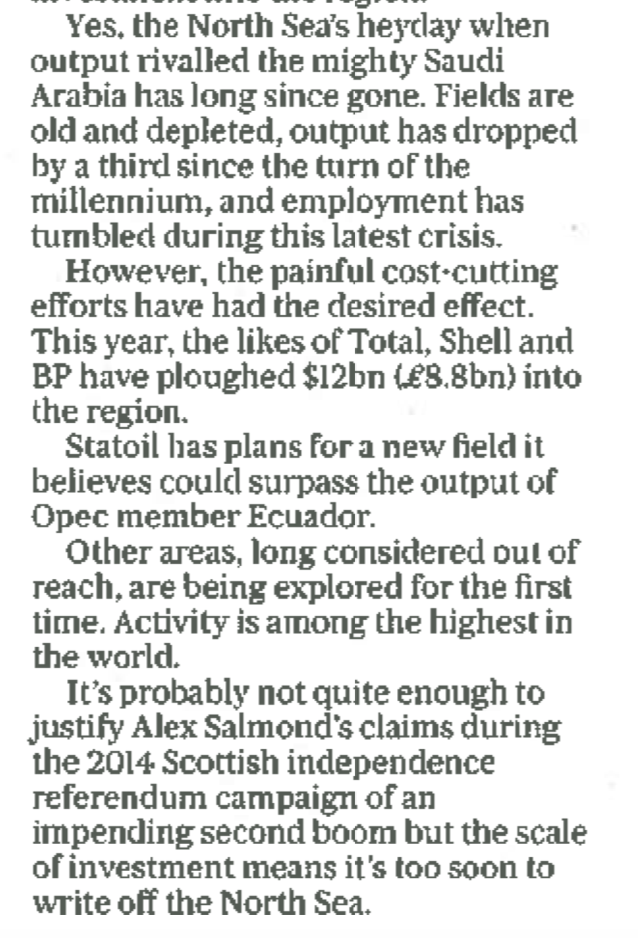 And then the N-56 organisation, which aims to make Scotland one of the top five wealthiest countries in the world, has produced a series of reports on the outlook for oil & gas in an independent Scotland. They also intervened in the referendum campaign but with considerably rosier figures for Scotland’s oil revenue future.(Ref: N-56 Reports) And guess what? Their higher estimates for revenues come from applying a Norwegian style tax system.

It’s certainly true that the UK North Sea sector is an old sector, it’s not producing so much now as it did, and various factors mean that it’s more expensive to get that oil out than in other places in the world, including the Norwegian sector. On the other hand

Last legs? Or rejuvenated legs?
What you can sell oil for is part of whether it’s profitable or not. But just as important is what it costs you to get it out of the ground. If costs fall then profits rise all round and it can also make some oil fields worth maintaining in production.

For example: The Financial Times reported a few facts about North Sea oil costs in September 2017:

When I read that BP’s production costs had halved to $15 / barrel I thought that was the whole cost of getting a barrel of oil out of the ground. And hey, oil is selling for $68 a barrel so whoopee!

It’s not as good as that though. Production costs are one of several types of cost. Here are what all costs were in April 2016. And what’s interesting is the difference between UK and Norwegian overall costs. Ref: WSJ, Apr2016 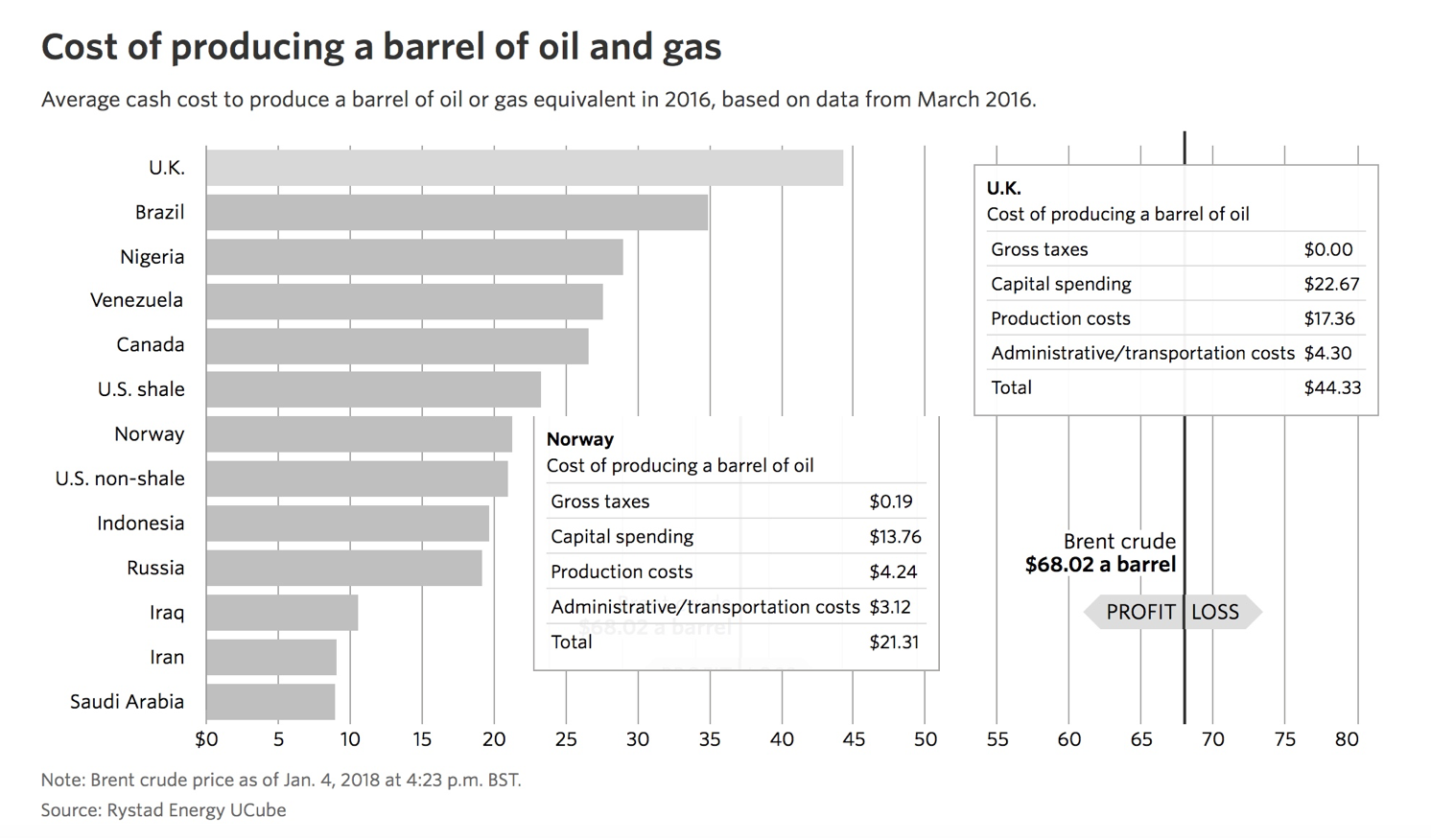 But all this does make it clearer as to why so many voices of doom were heard in 2016 about the end of North Sea oil. In Jan 2016 oil had dropped to $29.64 a barrel and although it didn’t stay there long it hovered between $45-50 through most of that year and into 2017. In other words not a profit to be seen.

However now things are looking rosier for North Sea Reserves: 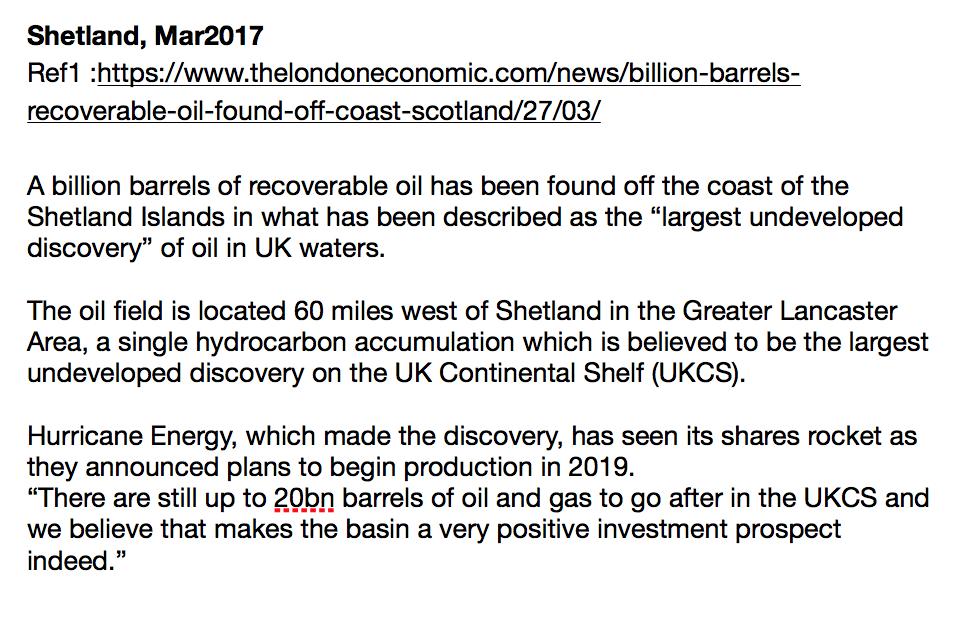 Have you taken that in?!!

In 2011, Scotland produced 60% of EU oil production and a third of its hydrocarbons, ie we produced a third of the base stock for the EU chemical and pharmaceutical industries!!

At 1.5millions barrels a day and $26 overall profit per barrel ….. that’s over $13billion clear profit a year if they are using North Sea to mean the UKCS. So if we taxed that at the Norwegian rate of 78%, that is a tax revenue of $10billion. And 95% of it is from Scottish waters.

Now look, I know that while the arithmetic is accurate, the assumptions behind it are incomplete … there are capital costs get spread over a period of years, there’s probably depreciation, no doubt they can offset losses from previous years, and there will be some decommissioning tax breaks. There are probably other tax breaks that I know nothing about. So $10billion a year revenue is not going to happen.

But I’m just sayin’…. if Norway can show such good stewardship, so could Scotland and do a damn sight better than Westminster.