If you’re Scottish, whether or not you live in Scotland, you’ll remember the morning of 19 Sept 2014. If you wanted Scotland to be an independent nation, then you’ll remember deep disappointment. If you wanted to remain in the UK, then I suppose you’ll remember relief. Because it had been looking like an increasingly close run race. I remember just before the 18th when a poll was announced that had Yes in the lead. It took my breath away. These were taken in Sauchiehall  Street, Glasgow, the Saturday before the vote:

Vote as if you live in the early days of a better world!

But it wasn’t to be. 55% of us decided we were better together. The Better Together campaign had assured us it was better to be in a Union were we were an equal partner, where we were invited to lead the UK, where our jobs and pensions would be safe and we’d have all the benefits of full EU membership. Oh and Gordie Broon said we would have the most powerful devolved parliament in the world. Then on the morning of 19 Sept, David Cameron stood on the steps of No10 and announced he was bringing in EVEL, English Votes for English Laws. And a few months later the Tory, Labour and LibDem Unionist Parties maintained their united stance in the Smith Commission and voted together to block as many powers being devolved to Holyrood as they possibly could.

They won’t be able to pull those stunts a second time. But we need to be sure that we’ve addressed peoples’ concerns from last time and be able to convince them to move to Yes.

Ashcroft’s 2014 poll carried out on 18/19th Sept with 2,000 people who had voted in the referendum  identified some of the main concerns which Yes & No voters had  generally. All these illustrations are from his poll’s results.

For No voters the biggest concern was the Pound (57%), there was a very close tie for second between pensions (37%) and the NHS (36%) . Yes voters weren’t so bothered about the first two but were more concerned about the NHS than Yes voters.

Interestingly EU membership didn’t rank very high with either Yes or No voters. For No voters maybe that was because no-one thought UK would be leaving the EU. And for Yes voters, they were sure we’d join the EU after independence, despite warnings from Better Together that Spain would veto us.

Other options show up other trends. What was most important for No voters were economic concerns, followed by bonds of history & identity, and getting the best of both worlds:

For Yes voters it was overwhelmingly that decisions about Scotland should be taken in Scotland.

I think this throws up some intriguing issues for an IndyRef2 strategy:

Then there’s the gender, age and political allegiance patterns : 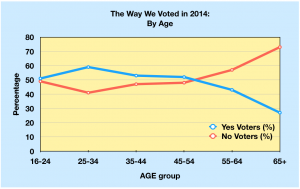 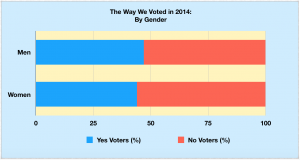 Where are we now? Can’t write any more now. I’m away to watch Dr Who. You’ll need to wait for the next post.