We’re about the same size, the same population, the same languages, inter-twined histories, and we’re just next door to one another. 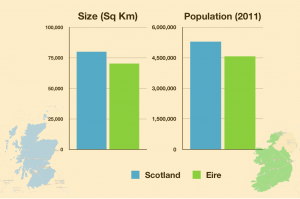 We both like music, poetry, literature, sport, whisky, even though we spell it differently. What’s not to like?

Scotland’s got lots of natural resources, especially in energy and fishing, so we could give Eire a good deal there. We’re both outward looking peoples who have settled in far flung parts of the world. Admittedly sometimes for the same sad reasons of poverty, famine or land clearances. But sometimes just for the sheer adventure.

Looking at us from a different angle.. Surprised? England is not looking so dominant, eh? Actually together Scotland and Eire are bigger than England in size. (OK, England still tops us in population. ) 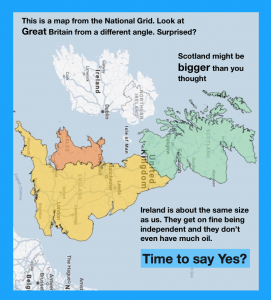 But it has to be said that there are differences too. I mentioned that we have inter-twined histories. That was sometimes for good, for example St Columba’s mission to Iona in 6th century was probably a good thing, but sometimes had unfortunate consequences, for example the Plantation of Protestant Scots over to Ulster in the 17th century which has arguably contributed much to the political troubles of Eire .

Coming into the present, per head of population, Eire’s economy is about half as big again as the UK’s and Scotland. That doesn’t mean Scotland can’t afford to be independent, our economy compares pretty well with independent countries all over the world. It’s just that Eire has been doing very well. Not as well as Norway but then Norway has all that oil. Hmm….

These are figures from 2015 from the World Bank: 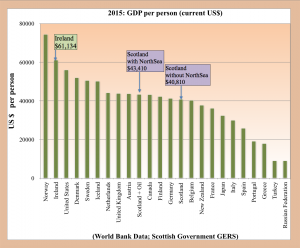 A thriving economy brings other benefits in its wake. For example: 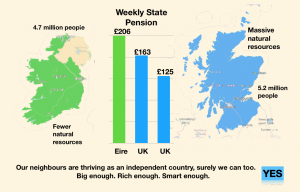 You might be wondering why there are two UK State Pensions. It’s because a new higher level of pension was introduced for people born after 1951 (men) or 1953 (women). That higher pension is in effect now for some new pensioners. But it is not available to people born before those dates who stay on the basic pension, currently at £125/week. Most current UK pensioners were born before 1953 so most are on the lower pension. If I was Irish I’d be getting more than one and a half times as much money a week as I am in UK. That drops to a one and a quarter as much for you younger pensioners. I’m told by friends that the cost of living is a bit higher in Eire so that eats into the extra cash, but still.