Why Irish Eyes Are Smiling and Ours Could Be Too.

One of the arguments which keeps being thrown up against Scottish independence is that most of our trade is with the rest of UK and we can’t afford to jeopardise that. I don’t really understand why Scotland being independent would jeopardise it, unless the English just refused to trade with us out of bitterness and revenge. Personally I don’t see many English folk maintaining a boycott on Scotch whisky or gin for very long. Also they will be dependent on Scottish oil and gas so any trade boycott of us would merely result in cold houses, petrol shortages and energy prices going up for them. And would it bother us for very long? There’s plenty of other markets for those commodities.

But the real reason for not paying too much attention to taunts of “you can’t afford to lose your biggest customer” lies across the Irish Sea. If you google for Irish export trends you’ll find this report from the Irish Central Statistics Office report “Ireland and the EU 1973-2003, Economic and Social Change” which says:

One of the main features of our membership of the European Union has been free and open access to a large European market. This access has also been one of the main reasons for attracting foreign direct investment. Prior to 1973 Ireland was largely dependent on our nearest neighbour, the UK, as our main trading partner. Since then this dependence has declined. In 1973 almost 55% of the total value of exports went to Great Britain or Northern Ireland, followed by Other EU (21%), Rest of World (14%) and the US (10%). By 2003 the percentage of exports to the UK had declined to 18%, while the value of exports to the Other EU countries increased to 43% or €35.5 billion. The United States which now takes over 20% of exports has overtaken the UK in terms of importance as a trading partner. 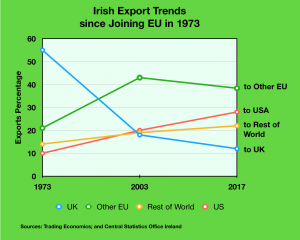 The same report also says this:

So Irish exports have grown at twice the rate of imports over the past 45 years. And although that 74-fold increase in exports in the balance of trade is offset by imports of services, Ireland still had a positive balance of trade of over €4billion in 2018:

In comparison, the UK has been running a balance of trade deficit for decades. In fact wev’e hardly been out of the red since I was born! Currently we are in the red to the tune of  £1.3billion.

So much for us being a trading nation. More like the UK is a bankrupt nation. Though there is one part of the UK which does have a positive balance of trade. Guess which part? 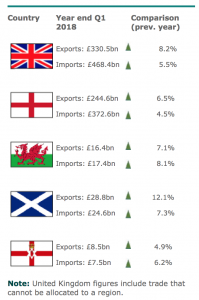 To My Unionist FriendsScottish Independence