I spent a very enjoyable day in Perth last Saturday. I went up for the AGM of Women for Independence. It’s always a really interesting and well organised day and this year we had the added attraction of the First Minister coming to speak, take questions, eat tablet, and post for photographs. I am really kicking myself for not taking my camera!  I only had my phone with me and I ended up with lots of out of focus snaps among the few decent ones. I like this one, though. I met up with a friend at the meeting and we got ourselves a photo with the FM ❤️. (That’s me with the scarf.) 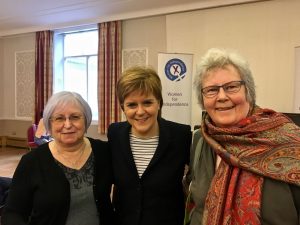 One thing that’s clear is how much hard work the WFI National Committee have been putting into their proposed “Womanifesto”. To be honest, I don’t think it works very well as a neologism. And it comes out as either Womany- festo (emphasis on first syllable) or Woo-manifesto (emphasis on second syllable). I’m really hoping they ditch the word. But they are building an impressive policy agenda for women in Scotland, now and after independence. 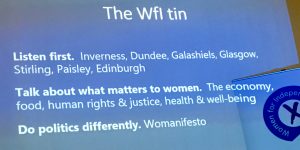 Not quite sure what the ‘tin’ on the slide means in this context – maybe it’s what’s on the ‘W4Indy tin’. Or maybe it’s a typo! But the rest of what’s on the slide described what they’ve been doing: listening to women at meetings all round the country; talking about what women say matters to them, setting up a way of doing politics differently which is where Womanifesto comes in.

After lunch we broke up into four large groups and each group had the opportunity to see a summary of what’s come out of this process. The group I was in looked at the economy and human rights & justice topics. There was a lot of info even in the summary, and not a lot of time, but they got lots of post-its with our responses and suggestions.

So the tablet. Some kind soul had made enough tablet to supply over 100 women. There was a box on each table and a plate on the table where Nicola was taking questions from the audience. She’d definitely finished it off by the time we were taking photos!

Next time I’m taking my camera but here are the photos, such as they are:

This is the default gallery type template, located in:
/home/www/weegiefifer.scot/wp-content/plugins/nextgen-gallery/products/photocrati_nextgen/modules/nextgen_gallery_display/templates/index.php.

If you're seeing this, it's because the gallery type you selected has not provided a template of it's own.