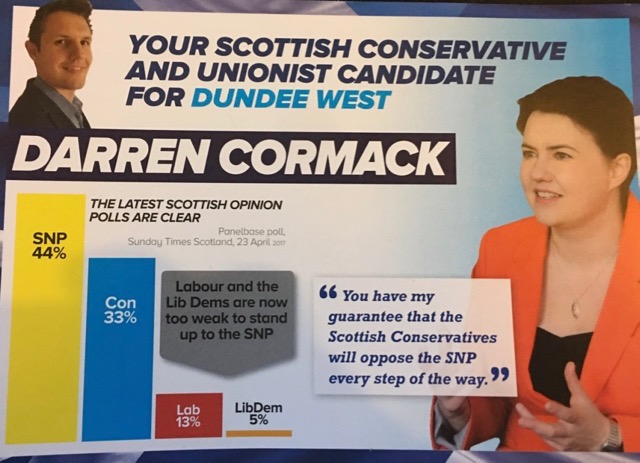 I was looking at a bit of Tory election campaign bumff that came through our door. It was the same as the one above except that it had the name and photo of the Tory candidate in my constituency. Now that’s fair enough. It makes sense to have a central campaigning theme with your local candidate added. You’ll see that it has the claim that “Labour and LibDems are now too weak to stand up to the SNP”. On the reverse it said “Tory Revival on Course to Foil Independence.” That’s standard for this Scottish Tory campaign – they are the champions of the Union holding their ground against hordes of divisive Nationalists.

Now I usually just bin anything from the Conservatives immediately but the graphic which supposedly showed a Panelbase poll result from April to back up that first claim seemed a bit off to me. So I redrew the actual poll figures and compared them with the Tory leaflet version by measuring the height of the columns on the leaflet. The blue columns show the real spread of support as reported in the Panelbase poll and the green columns are what the Tories would have us see : the results are skewed to exaggerate the position of both SNP and Tory whilst under-representing Labour and LibDems. Now Labour is weak and LibDems are showing no signs of recovery but they’re not this weak!!

The Electoral Commission have powers to oversee fair play in UK election. They have a section on making complaints but it says they don’t have authority over election campaign content :

We frequently receive complaints about political advertising or campaign material and the behaviour of candidates, especially in the period before an election. These are not within the scope of the complaints policy and will be referred to our Public Information Team.

While we have regulatory duties relating to campaign spending, including in relation to political advertising/election material, we have very few powers to deal with the content of material published by candidates and parties, or their general conduct. In most cases we will not be able to deal with such complaints, which should instead be made directly to the party or candidate responsible for the material.

So there didn’t seem much point in contacting them.  Instead I sent emails to the four candidates standing in my constituency containing a copy of the graph comparisons. Well I tried to. The email address given for my LibDems candidate returned undeliverable – which is about the same as his chances of being elected. The Tory candidate hasn’t replied – which is maybe to be expected. I did come clean and tell him that I was never going to vote for him anyway.

This is my email:

Dear ….
Yesterday the Conservative campaigners dropped a leaflet through my door. It has the claim that “Labour and LibDems are now too weak to stand up to the SNP” alongside “Tory Revival on Course to Foil Independence.” I usually just bin them immediately but the graphic which supposedly showed a poll result from April backing up that first claim seemed a bit off to me.

So I redrew the actual poll figures and compared them with the Tory leaflet version. The blue columns show the real spread of support and the green columns are what the Tories would have you see : the results are skewed to exaggerate the position of both SNP and Tory whilst under-representing Labour and LibDems. Now Labour is weak and LibDems are showing no signs of recovery but they’re not this weak!!

I suspect that they’ve chopped off the bottom section of the polling graph, possibly to fit it on their handout. Perhaps it’s more malicious than that. Either way it needs stopped.

I’m sure you’d want to check my figures but I’m pretty confident in them. Maybe you can do something to halt this sort of deliberate misinformation. Or at least use it to oppose Ms Davidson’s cohorts

My MP is Carol Monaghan SNP. Here’s her reply to my email:

Many thanks for getting in touch regarding the graphic on the Tory leaflet. You and I must have had the same thoughts when we saw that particular graphic! Of course in my former life as a physics teacher, any of my students producing a graph such as this would have been sent back to correct their errors. I am delighted that you have done this correction for the local Tory candidate. Unfortunately it is difficult to prevent a misleading message being spread. It is something in that I am becoming increasingly used to, and of course politicians love challenging each other on the particular way in which they choose to present information. I will of course refer to your correct graph at appropriate opportunities and I would suggest that you do likewise.

Thanks again for getting in touch and for displaying your un-Torylike numeracy skills.

I also got a reply from the Labour candidate though I’d inadvertently not included an attachment with my graph so he hadn’t seen the comparison. He took the time to reply even so which was good of him.

Thanks very much for your email – lovely to hear from you. I can’t see anything attached but I can imagine the graph you are talking about. Of course it’s also based on a national projection and has no relevance to what is the possible outcome in this constituency – where the Conservatives have zero chance. I find the whole graphs on leaflets obsession a bit frustrating – especially when there are so many other issues we could be talking about.

For my part, I’ve been running a positive campaign about our plan to make Britain a fairer and more socially just country – an economy that works for all not just the wealthiest few. I work with children in the care system and I see day in day out the impact of austerity and cuts on families across this constituency – that’s what has motivated me to stand to be your MP.

Thanks again for getting in touch and I hope we see the end of the ‘fake graphs’ soon!

He doesn’t seem to mind the Tory skewing of his electoral position since they have zero chance of winning this seat. Of course that’s ignoring the fact  that this skewed information has been posted through letter boxes all over Scotland not just in this constituency. Still he is right that they have zero chance of winning in Glasgow NW. For Labour to win they’d need to overcome the SNP’s 24% lead after the 2015 election. Compare that to when I moved into this constituency: in 1978 this was the only Tory seat in Glasgow. It changed to Social Democrat when they split from Labour in 1980s and we had Roy Jenkins as our MP, then it went to Labour and George Galloway was MP. It stayed Labour under John Robertson until 2015 when Carol won for SNP. I don’t think Carol has much to worry about being returned for a second time. 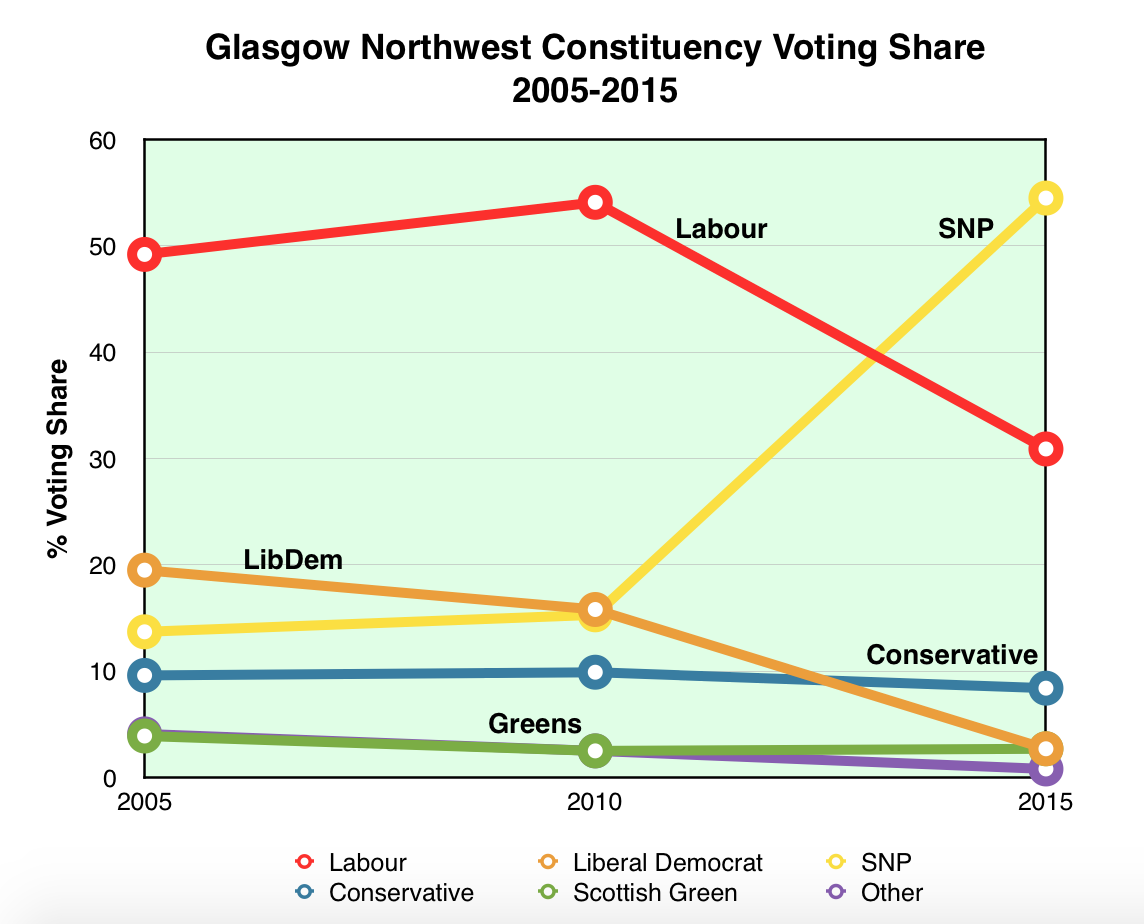